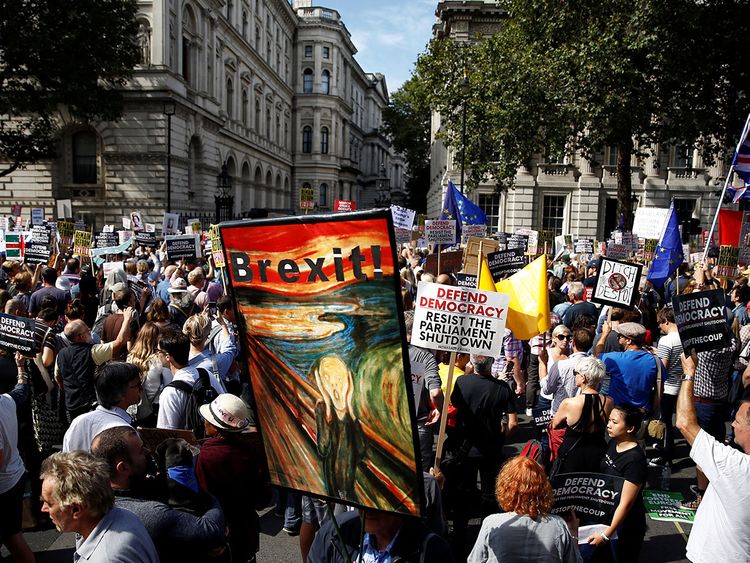 The protests come ahead of an intense political week in which Johnson’s opponents will seek to block the move in court and legislate against a no-deal departure from the EU — and could even try to topple his government in a no-confidence vote.

Thousands of protesters took to the streets of various towns and cities from late morning, with organisers — using the slogan #StopTheCoup — saying they hoped hundreds of thousands would take part.

The left-wing group Momentum, closely allied with the main opposition Labour Party, called on its supporters to “occupy bridges and blockade roads” ahead of the protests.

Crowds gathered in Manchester, York and Newcastle in northern England, the Scottish capital Edinburgh and Belfast in Northern Ireland, with events planned in around 30 locations.

The biggest demonstrations were expected in London, where thousands of whistle-blowing, drum-banging people, many waving EU flags, had converged on Downing Street by lunchtime chanting “Boris Johnson shame on you!”

They also held hand-written signs reading “defend democracy: resist the parliament shutdown” and “wake Up UK! Or welcome to Germany 1933”.

“The decision about what happens to Brexit shouldn’t be a matter of what Boris Johnson decides,” said Bernard Hurley, 71, who turned out in Westminster.

“He’s taken the decision away from parliament which is undemocratic.”

Around a dozen shaven-headed men draped in Britain’s national flag walked through the crowds escorted by police shouting: “What do we want? Brexit! When do we want it? Now.” AFP